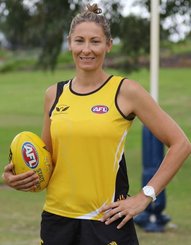 Experienced coach Martine Pearman has been appointed to lead WA’s State Open Women’s team in 2016 after a history of success in recent coaching appointments.

Her extraordinary coaching resume also includes previous coaching roles with the WA State Opens team including an Assistant Coach role in 2015 when WA won against Victoria, and in 2013 when WA finished second.

Martine’s commitment to the WA Women’s League is one of determination, being a premiership player herself, and leading the Coastal Titans League side as Head Coach to grand finals in 2012, 2013, 2014 and 2015. Of these four grand final appearances, Coastal Titans took home the silverware in both 2012 and 2015.

In impressive style, Martine has won the Subiaco District Coach of the Year award twice, in both 2012 and 2014 and in 2013 was nominated at WA Football Commission Coach of the Year. These achievements have opened the pathway to other coaching opportunities, as Martine is currently a Development Coach at Subiaco Football Club with the League team.

WAFC Female Talent Manager Alison Moore congratulated Pearman on her appointment and said she was truly excited to have Martine as Head Coach knowing her enthusiasm, knowledge, experience and professionalism would be be a major asset in producing the best possible teams.

“Martine’s AFL experience with Melbourne as an Assistant Coach over the past 2 years for the Women’s Exhibition games will be invaluable for preparing our WA players for games on the MCG, Etihad and Metricon Stadium.

“Martine’s polish, preparation and in depth knowledge of other states elite level players assured us she was the right candidate for the Head Coach’s role.”

Alison explained she was looking forward to WA taking another win against the Victorians, this time on their home soil, to once again confirm the strength and determination of WA players.

“Our players have worked exceptionally hard over the summer and this should be the basis for some standout performances in this year leading up to the National Women’s League in 2017 “ she said.

This year’s WA State Opens campaign will see the team travel to Melbourne across the weekend of 5th June.