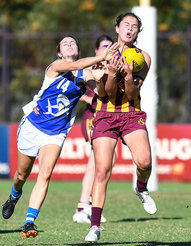 It’s been a few years between premiership drinks for both East Fremantle and Subiaco. Come Sunday afternoon, that equation will change.

With the Sharks searching for their first flag since 2011, their journey in 2018 has been telling. From round one, the club wasted no time taking the wheel and steering it to the top of the ladder – and not once have they looked back.

Accomplishing a minor premiership, 15 wins and an average winning margin of 56 points, the Sharks raised the bar as the very best in the competition in 2018.

Amassing eight wins and finishing fourth on the ladder, Subiaco have emerged as the surprise package of the finals series. With two consecutive wins over third placed Swan Districts and second placed Peel Thunderbirds, they’ve certainly hit peak form at the right time.

Winning their last flag in 2015 as the Coastal Titans, the club will be looking to secure their first premiership in their new maroon and yellow colours.

Meeting a the fourth time this season for the 2018 premiership, Subiaco will be looking to move past East Fremantle – a team who has already beaten them three times this year.

East Fremantle Vice Captain Ashlee Atkins said the club was treating the upcoming grand final just like any other game.

“Our preparation and mindset wont change in that sense,” Atkins said.

“Subiaco are a great side that have really come into some form the last couple of weeks, so we definitely think we’ll have a tough game on our hands.”

Fresh off her 2018 Dhara Kerr Best and Fairest win on Monday night, AFLW Fremantle Docker and Subiaco Lion Captain Hayley Miller’s prolific form has been telling in 2018. Displaying effective run and carry, racking up the clearances in droves and exhibiting gritty tackling pressure across this season, her ability to win the ball and use her effective skills with both hand and foot is certainly going to make a difference come grand final day.

Subiaco Coach Simon Quayle said he had relished the opportunity to promote skill and understanding within the squad throughout the season and looked to take that into Sunday’s grand final.

“There were heaps of new players with limited exposure to football. My approach and message was to teach the game, coach the person,” he said.

“It probably took nine rounds for our players to adapt, grow, and improve their mindset and be consistent. We weren’t far off in some of our losses in the early rounds. The girls took it to a new level with empowerment managed by developing onfield leaders. They have been outstanding as a group.”

Simon said the Subiaco squad were over the moon and were using the week to reflect on their growth over the duration of the year.

“East Fremantle are an outstanding group, coached well and have a full list of good players. They deserve to be the outright favourite. We’ll be preparing as normal;  focus on skills, focus on team, focus on what we do well,” he said.

"Finals are all about winning. Coming from 4th, every week was an elimination. The club has only one goal, to win.”

The 2018 Mundella WAWFL League Grand Final will be played at Claremont Oval on Sunday August 26 with bounce down at 2.30pm, following Reserves at 12pm and Rogers Cup at 10am. All games will be live streamed on the Mundella WAWFL Facebook page.