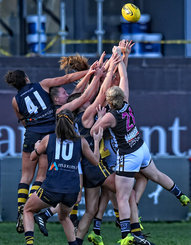 If any game was going to walk the talk in round 11, Claremont’s clash with Swan Districts on Sunday afternoon certainly did the trick.

With five consecutive losses to their name, Claremont needed to do something special if they were going to overpower the in-form reigning premiers.

A Swans victory would’ve added fuel to the clubs’ case as strong premiership threat and enhanced their recent record to five wins in their past six outings. A loss would’ve put all the above in jeopardy.

From the opening bounce, it instantly became clear both sides were hungry for the four points, and hungry to prove themselves.

Frantic and quick, both the Swans and Tigers competed hard for the football in a stoppage-heavy opening quarter.

Kicking off proceedings in front of the big sticks, Jasmin Stewart converted Claremont’s first after winning a free kick from a push in the back infringement.

The Swans didn’t take long to respond, with Rhonda Williams’ prolific run and a neat chest mark earning the away side’s first major for the afternoon.

Lauren Osborne continued the trend and reaped the rewards from her solid run off the half backline to kick the Swans' second. She was closely followed by Maddison Ugle, who also used her brilliant pace to advantage to run the ball off half back to convert for the Swans’ third strait goal.

While Claremont held possession, dominated disposals and the inside 50’s, maintained prolific run and fought hard in the clearances, they were unable to register their dominance and poise on the scoreboard, finding themselves in a 17-point deficit and with only a single goal to their name at half time.

Claremont’s Allana Dickie fought hard all afternoon to restrict Swan Districts’ forward 50 entries. Consistently reading the play, her ability to take intercept marks across half back made things a bit tougher for the Swans.

Swans Emily Mcguire and Taryn Priestly battled well around the ground to rack up plenty of touches, clearances and tackles across the four quarters.

Stewart answered Claremont’s goal scoring drought in the third quarter, putting toe to footy amongst traffic to kick her second and reduce the margin to less than two kicks.

Shifting the momentum back to the Swans, Ashley Sharpe unloaded with a 70m sprint on the wing. In what would become the Swans’ final goal of the day, Sharpe was uncatchable as she ran lightning fast to find herself face-to-face with an open goal.

Moments later, a head-high free kick awarded Robertson her first major for the day. This cut the Swans’ lead back to 10 points.

Slotting the opening goal of the final quarter, Robertson kicked her second to claw the margin back to four points.

A 50m penalty then put Isabella Zadnik in scoring range, to which she converted truly to give Claremont its first lead since the opening minutes of the first term. As the Claremont crowd erupted out of their seats, the Swans couldn’t convert up forward and managed a final two points to level the scores.