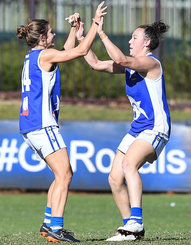 When a team is topping the ladder halfway through the season, chances are there isn’t much its doing wrong. In the case of East Fremantle, they aren’t doing anything wrong.

In fact, with it's League side undefeated and it's Reserves and Rogers Cup squads sitting inside the top four of their respective ladders, it’s no wonder the remainder of the WAWFL are already labeling the Sharks as the team to beat.

Fresh off a victory over Subiaco, East Fremantle League Head Coach Nikki Harwood attributed the club’s success to the mental and physical standards that many of its players had been exposed to earlier this year through the AFLW.

Coming into season 2018, Harwood said the aim for each grade at round one was to win one quarter of football each. If results are anything to go by, the club has certainly exceeded that standard.

“They’ve been working extremely hard since November so it’s fantastic to see them getting reward for effort,” Harwood told wawfl.com.au.

Fresh off her debut season as a Fremantle Docker after breaking into the AFLW ranks in 2017 as a GWS Giant, East Fremantle Captain Alex Williams is on the cusp of returning to the WAWFL following recovery.

Speaking to wawfl.com.au, Williams said while being on top was a good feeling, the club certainly wasn’t getting ahead of themselves.

“It’s been really good, we have had a few younger girls join the team this year and they’ve contributed and complimented the players we already had really well,” she said.

“I’m really happy with how we have come together – we’ve gelled as a group quite well. All the demanding work that started with pre-season where we had a really solid few months of training is really showing.”

Though taking an average 44-point winning margin into round eight, Williams said the girls never underrated any of their opponents.

“We've come up against really strong competitors this year, which I think it’s a positive for the future in women’s footy with just how competitive and strong the teams have been.”

East Fremantle President Kate Argent said while the club was aspiring to win premierships in all three grades, this objective always came secondary to creating a “great club with a great culture.”

“To help with that we've partnered with Women and Leadership Australia to provide a leadership course to 11 of our players and volunteers. This program has been running since February and has given the group some excellent development opportunities,” Argent said.

“While the players have certainly been getting the challenging work done at training and on game days, as a whole club we've been lifting our standards and expectations over the last few years.”

This has certainly been reflected in the calibre and dynamic of the club, which has built itself up and secured a group of support staff in place that reflects a classic WAFL club model. This included the introduction of a football manager, head coach and three coaches across each grade, a strength and conditioning team, physiotherapist, trainers, team managers and a player welfare manager.

“Players are being professionally managed back from injury with Enhance physiotherapy working with our strength and conditioning staff,” Argent said.

“Our Player Welfare Manager Jules has become an essential part of our player management. The coaching team that Nikki and Steph have put in place is excellent and we're focused on continuing to develop their skills as well.”

While East Fremantle’s league side hasn’t taken home the silverware since 2011, Williams said the squad was still taking the 2018 season week by week – grand final day isn’t even on the agenda.

“I don’t think anyone has mentioned that word (finals) yet. We still have half a season left and have quite a bit to work on over the second half of the season.”

Harwood said the club wouldn’t have the current success it did without the dedication and hard work of its coaches, players, support staff, board and sponsors.

“Nothing changes for us, we will continue to approach every game in the same way as we have been. Every game is a new challenge, so we just try and raise our bar each time by polishing our strengths and improving on specific focus areas,” she said.

“I personally hope that we will get all three grades into the finals. Our Rogers Cup side have a very difficult draw so will need to continue their good form of the last few weeks to maintain that.”