Rogers recognised at Football Woman of the Year AwardsTuesday, October 3, 2017 - 7:57 AM 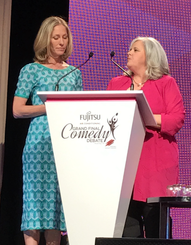 The annual Awards, which are hosted by the Essendon Women’s Network as part of AFL Grand Final Week, recognise women in the industry who have made a significant contribution to the game of Australian Football.

The Community Award recognises those who work in a volunteer capacity, whether it be at the grass roots level, or through their voluntary contribution to clubs at the highest level.

Charmaine Rogers has been supporting the progression of women in Australian Rules Football since 1996 and has undertaken various roles within the WAWFL for the past 21 years.

Through her role as a board member and WAWFL president she has been able to support growth in female participation and has developed strategies to ensure financial stability and secure the future of female football in WA.

“Charmaine's passion, energy, enthusiasm and encouragement to women of all ages, and the way she highlights the many career pathways, is to be applauded,” she said.