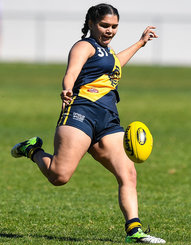 Bringing consistent touches of class and professionalism across four strong quarters of football, Claremont has moved past the Peel Thunderbirds to win their first reserves premiership since 2015.

Early on in the piece, uncontested possessions proved hard to come by.

Leading from the front, Claremont Captain Angel Hayward kicked the first goal of the game. Moments later, Lolita Viska slotted Claremont’s second with a free kick from a 50m penalty.

Forcing the ball into their attacking 50, locking the ball in there and repeatedly pushing up the ground, Claremont had Peel under some serious pressure. Remaining scoreless for the majority of the opening term, the Thunderbirds needed something special.

With three minutes remaining until the first break, Peel suddenly found their mojo. Maddie Byford’s clever ‘something out of nothing’ snap shot saw Peel kick their first.  Less than 40 seconds later Peel had another goal on the board, and all of a sudden, Claremont’s two goal lead was trimmed back to a three-point ball game.

Claremont’s Amber Ugle-Hayward wasn’t having a piece of it, and with less than 30 seconds on the clock, she snuck into the goal square for a quick goal.

The physicality and intensity of the game certainly reflected the hunger of both sides.

Katharine Thayer copped a whack and was taken from the ground with blood on her jumper. Courageously, she returned and played out the remainder of the game. In a major blow for Peel, Rebekah Raston popped out a shoulder and was in a world of pain after laying a hard tackle.

From the second quarter onwards, Claremont swiftly moved the ball forward, increased their intensity and wasn’t letting anything pass them. Defensively, the Tigers limited Peel to just two goals after quarter time. In the same space of time, Claremont’s dominance saw them kick nine.

Finishing with three goals to her name, Hayward finished as the most damaging forward of the afternoon.

“It really intense and Peel gave it to us every second of the match,” she said after the game.

“It’s been amazing journey this entire season, we’ve all worked so hard this season and we’re certainly going to celebrate.”

Hot on her heels on the scoreboard, Ugle-Hayward and Jasmina Andros finished with two goals each.

A consistent performer all afternoon, Ugle-Hayward (pictured) was  awarded best on ground honours. A deserving winner, Ugle-Hayward made the most of her opportunities, displayed solid run across the ground, presented well and racked up the possessions in droves.

Eventually running out 69-point winners, the Tigers dominance and poise around each contest made them worthy premiers.